– The Gdańsk fleet will be joined by vehicles that are among the most modern electric buses in the world. This fact is extremely pleasant and we hope that this quality will be noticed and appreciated by the inhabitants of Gdańsk during their daily ecological journeys in our city – says Maciej Lisicki, President of Gdańsk Buses and Trams.

– The bar of our expectations for vehicles – both their parameters and their quality has been set very high. And there are results – adds GAIT Vice President for Operational Affairs Jerzy Wiatr. – Only the best companies were able to meet our requirements. We have received offers from representatives of major brands such as: MAN, Mercedes Benz, Solaris. The best bid won – says the vice president of GAIT.

Based on evaluation criteria, such as price and technical parameters, the offer of MAN Truck & Bus Polska sp. Z oo has been won

– Operational values, such as battery range and capacity, the comfort of our passengers and durability, i.e. the structure of the vehicle and the materials used for it, are of a importance for us – explains the vice-president of GAiT. – MAN buses are characterized by high range and, importantly, a large battery capacity at the same time. Thanks to this, the vehicles will serve the Gdańsk lines without having to recharge them in the city, that is, during the route. They will be charged at the deposit.

The range of the standard electric bus offered by MAN is 401 km, while that of the articulated bus is 340 km. 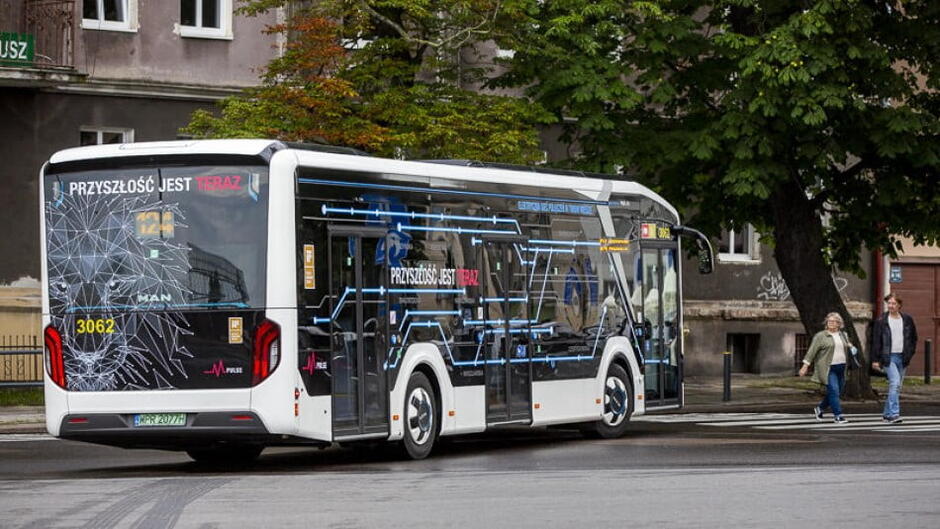 In accordance with current standards in Gdańsk public transport, new vehicles, like those already owned by GaiT, will be adapted to the needs of people with disabilities and people traveling with strollers.

Thus, the buses will have a designated area for the safe transport of a person in a wheelchair and a pram, and a platform allowing the entry of a wheelchair.

Out of concern for the needs of people with reduced mobility and the blind and visually impaired – all columns and handrails will be made in yellow, and the buttons will be described in Braille. Vehicles will also have lanes for the safe transport of bicycles.

Passengers will have at their disposal comfortable ergonomic seats, made of materials offering increased resistance to vandalism.

The vehicles will be equipped with monitoring and air conditioning systems, with efficiency ensuring travel comfort even in hot weather, taking into account the specificity of public transport, namely the frequent opening of the door.

The passenger information signs will be made with high quality LED technology. The exterior and interior lighting of the vehicles will also be used in LED technology.

The first electric buses this year

18 electric buses, including 10 standard buses and 8 articulated buses, will join the Gdańsk fleet next year. They will be delivered by the selected company MAN Truck & Bus Polska sp.Z oo

The contractor will have 14 months from the date of signature of the contract to complete the contract, i.e. the delivery of 18 electric buses. The value of the entire order, i.e. 18 buses, is 61,782,900 PLN gross.

And this year, three Karsan Jest Electric mini-buses will arrive in Gdańsk, which will serve the Old Town and Main City district. In addition to the new buses, three electric chargers will be delivered to supply the traction batteries. Vehicles will be loaded at the bus depot.

The new electric vehicles, both minibuses and standard and articulated buses, which will join the GAIT fleet, will be equipped with advanced safety systems, namely an autonomous emergency braking system by the vehicle on obstacle detection and a blind spot assistant that will inform and warn the driver of the presence of an obstacle in the blind spot.

– Emission-free transport is an indisputably important part of the high quality of life in the city and a trend towards which the whole world is heading today. Electric city buses mean the reduction of noise and CO2 in the city, and in the future also its reduction on a global scale, when the energy sources will also be emission-free. It is important to note that currently more than half of passengers travel around Gdańsk using trams, i.e. zero-emission vehicles, said Piotr Borawski, Deputy Mayor of Gdańsk for Entrepreneurship and climate protection.

The tender for the charging station has been announced

The charging station management system will be integrated with the GAiT computer systems – charging and readiness of the vehicle for traffic will be correlated with the time of its departure from the depot.

Vehicles during overnight charging will be preconditioned. This means that the temperature in the passenger space will be as vehicles leave the depot for the destination route, depending on weather conditions.

– In addition, the chargers with a capacity of 150 kWh that we use will make it possible to recharge the vehicles also during the day, which will significantly increase their operational capacities, if necessary – adds Vice President Wiatr.

– Charging vehicles at the depot – a solution that Gdańsk will implement on such a scale as the first major city in Poland – is currently a notable trend in Europe. And this solution has many advantages – says GAIT Vice President Jerzy Wiatr. – Among other things, there is no need to build expensive infrastructure in the city, which, with the very rapid development of technology, will probably lose its raison d’être in the near future, given the ranges of vehicles in net increase . Importantly, vehicles charged at the depot can serve all lines within the useful range of the vehicle, as their route is not determined by the location of the charging infrastructure. It is therefore not necessary to adapt the timetables to the load requirements. In addition, charging vehicles at the depot, i.e. there is no need to charge vehicles in town, also does not cause problems when the route of vehicles changes and impossibility of reaching the charging point. The recharging system that we have adopted also makes it possible to take advantage of the cheaper night electricity tariff, underlines the vice-president of GAIT.

The Gdańskie Autobusy i Tramwaje company is applying for co-financing of the charging station construction project in the form of a grant from the National Fund for Environmental Protection and Water Management.

Tenders under the tender procedure can be submitted until June 21, 2022.