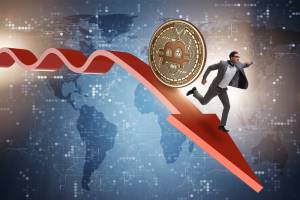 The price of Bitcoin continues to weaken, the king of cryptocurrencies again lacks the strength to stay above the $30,000 area and falls back to around $29,000. Is a drop to support around $22,000, where the 200 session average is underway, still likely?

Bitcoin is under supply pressure again

The offer around $32,000 was very active and again dominated in this zone the bulls hoping to break 9 consecutive weeks of Bitcoin decline for good;

Predictions pointing to a bitcoin floor at $24,000 seem optimistic. In the previous bear market, Bitcoin has always broken key areas, currently remains above them and has not slipped below $24,000 where according to on-chain data is properly valued, much less below the $22,000 defined by the weekly average of 200 sessions;

May for cryptocurrencies was decidedly not a successful month, but some investors are already positioning themselves for the rest of the year, keeping in mind, among other things, Ethereum’s move to the version 2.0 announced in August, major changes in the Cardano network and a potential rebound in stock indices herald a rebound in cryptocurrencies;

The growing problems of the global economy have recently been raised by, among others, Elon Musk and Jamie Dimon, CEO of JP Morgan. Cryptocurrencies are assets that have historically benefited from positive risk sentiment in the markets. Currently, we are seeing the reverse of this pattern and it is difficult to say when investors will change their perception of the new inflationary reality for good;

Decreasing corporate savings due to inflation and fuel prices may indicate that retail investor capital will not return to the cryptocurrency market as quickly as bulls would like. Even the manager of the Ark Invest fund investing in innovations, the popular Cathie Wood, joined the group of abstaining from very optimistic forecasts;

At the same time, many indicators are still talking about the long-term growth prospects of Bitcoin and the entire digital asset industry. Over the past 10 years, the rate of return on investment in Bitcoin has been incomparably higher than the rate of investment in the NASDAQ, S&P500, or even the biggest tech companies. Investors are aware of this and can always choose Bitcoin as a kind of “lottery ticket” and part of a long-term diversified portfolio. However, until sentiment in the markets improves and risk aversion subsides, a drop in Bitcoin to $22,000 still seems possible. 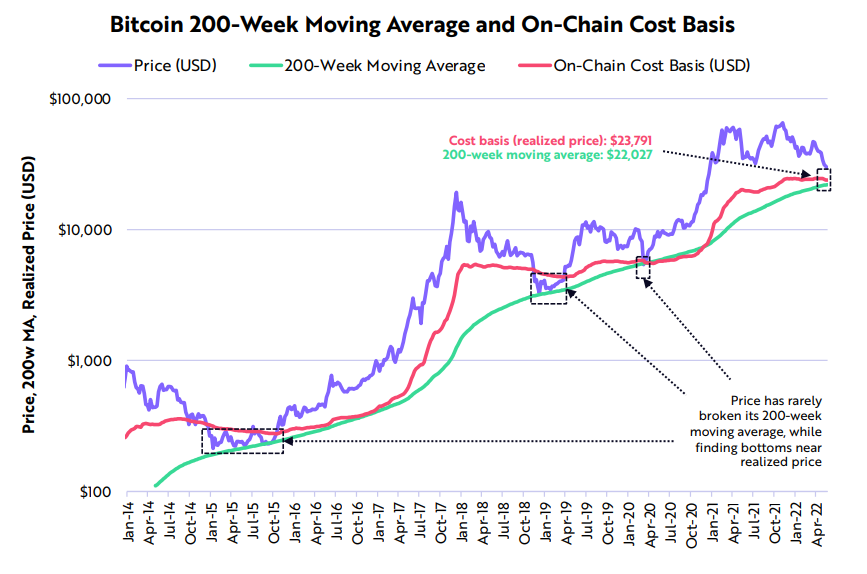 Historically, Bitcoin price cyclically in each of the previous bear markets has touched the 200 MA boundary on a weekly interval (green line). The chart doesn’t show it, but in the short term the declines to around 200 MA almost every time ended in a “flash crash” even 30% below, but demand quickly took control and quotes came back above average. These levels have also proven to be the best buying opportunities for long-term investors.

Recently, we witnessed a powerful impact of Bitcoin on the exchanges, which was directly related to the Luna crash. Historically, levels where stock markets have seen record inflows have also proven to be good bargains for buyers.

Nearly 66% of Bitcoin’s total supply today is in the hands of long-time holders who hold onto it for at least a year. In this way, we see that the number of long-term investors is increasing and may indicate a maturing market and form the fundamental basis for further increases.