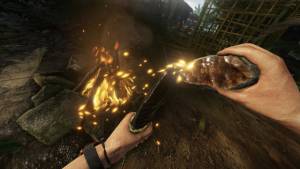 The wait is over – Green Hell VR has just been released in the PC VR Edition. The premiere was during today’s Upload VR Showcase, which also featured a brand new trailer. Green Hell VR uses the full potential of the PC VR platform and is now available for 89.99 PLN on the Steam store. To celebrate the premiere, there is a 10% discount on this price until June 16. Players can also buy the original Green Hell with the VR version through a promotional package that lets you buy both games at once with a 20% discount, which will be available until June 22.

We invite you to watch the first Green Hell VR trailer in the PC VR version.

Green Hell VR is designed to be a realistic open world survival experience. Incuvo developers took advantage of the extra time to increase the realism of the game with better visual quality, game mechanics specially designed for the PC VR version and a larger area to explore – which resulted in the the most immersive experience possible.

“The support from our players using Quest 2 has been very motivating for us, especially when we saw Green Hell VR climb to the top of the Oculus Store bestseller list,” said Andrzej Wychowaniec, CEO of Incuvo. – “We would like to thank all of our Creepy Jar fans and partners for allowing us to bring Green Hell in VR to audiences around the world. We look forward to hearing from PC VR users about this edition.”

Green Hell VR has already captured the hearts of brave adventurers using the Oculus Quest platform and tops the Oculus Store bestseller lists as one of the most authentic and engaging VR experiences on the market. . Players will encounter the terrifying power of the Amazon jungle as they lead anthropologist Jake Higgins in search of his wife, Mia, after they are separated by a mysterious turn of events. Using only a radio link to his beloved, Jake must navigate his way through the forest, remember landscape features, distinguish between useful and dangerous plants and animals, or constantly monitor his physical health. and mental. Skillful use of over 60 different game mechanics is key to surviving the jungle – players will need to heal, craft, build, hunt, fight and more. The experience is not at all like walking in the woods.

The Green Hell VR game produced by Incuvo SA is based on the critically acclaimed game Green Hell, released by Creepy Jar in 2018 for PC and later also on consoles. Green Hell captured the hearts of fans of the genre, resulting in over 3 million copies sold across all platforms.