Polish ClickMeeting returns after a year with an online etiquette survey. A year ago, 73%. respondents had their own business in the background of the meeting during online meetings, today 69 percent. Mute the phone and other electronic devices during the meeting. According to new data, 70 percent. of respondents before the online event prepare notes, and 60%. verifies that the hardware is working properly. Crucially, more than half of survey participants admit to seeing an improvement in attendee behavior in online meetings.

The latest ClickMeeting survey shows that 53%. of respondents noticed an improvement in attendees’ online behavior over the past year – exactly the same number of respondents who said they needed to introduce the online etiquette a year earlier. Plus, 18 percent. of respondents did not notice the change, and 29 percent. says he did not pay attention to these matters.

– Online meetings are definitely part of our reality. A year ago, we conducted research which showed that attendees of such meetings see the need to introduce clear rules of online etiquette. After a year, we came back with our study to see if there were any changes in participants’ attitudes to online meetings, and therefore if any new trends had emerged. The conclusions are clear: more than half of the respondents note an improvement in the online behavior of the participants. We can see that attendees are focusing on events much more often, confirming that they have more respect for online meetings. At the same time, we believe that the solutions that help to shorten the distance between meeting participants and improve the quality of online interactions that we are introducing on our platform have helped users navigate this new reality – comments Martyna Grzegorczyk , Communications and Outreach Manager .

A year ago, 45%. of respondents said they are most bothered when the person sharing the screen hasn’t prepared the material and is looking for it during an online meeting. However, currently 70 percent. of respondents say that before the start of the meeting, they prepare the notes and files that will be needed. Sometimes it happens to 22%. respondents, and only 8 percent. she replied that she does not prepare for online meetings in this way. 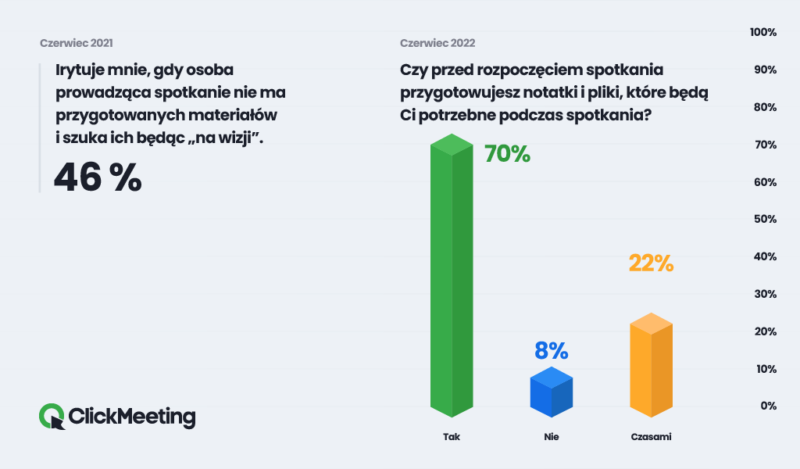 At the same time, 21%. respondents disrupted the meeting because they forgot the file or document they needed – 79% of respondents said they had never experienced such a situation. Respondents also check the desktop before sharing the screen, up to 66%. of respondents said that before sharing their screen, they check what windows they have open in the browser and what files are visible on their computer. On the other hand, 18%. people don’t, and 16 percent. sometimes. 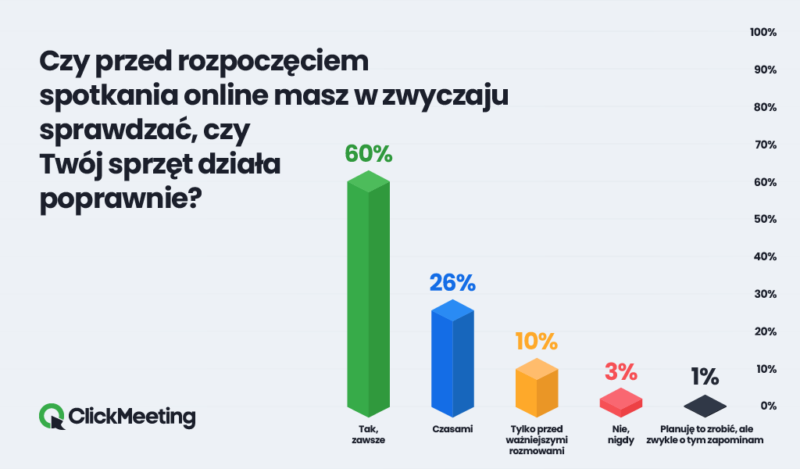 Equipment that isn’t working can also be a problem, as it can actually disrupt the flow of the online meeting. According to the ClickMeeting survey, 60%. of respondents state that they systematically check that the equipment is working properly before each session. Other answers given by respondents to this question are: I do it sometimes (26%), only before larger meetings (10%), I never do it (3%). Only 1 percent. of respondents said they plan to do it, but usually forget about it.

In last year’s ClickMeeting survey, almost 35%. of people said they ate, cooked, cleaned, answered emails or browsed social media while in an online meeting, and 38%. respondents said it happened to them when the meeting was boring. This year, 69%. Poles say they mute phones and other electronic devices during meetings, 12%. people don’t, and 19 percent. sometimes.