Bitcoin has lost 30% of its value in one month, and more than 55% since the start of the year. The decline in the rate continues, and it is close to the psychological barrier of $20,000, below which Bitcoin has not fallen since the end of 2020.

Much like stock investors, cryptocurrency holders are focused on monetary policy decisions by the Federal Reserve. With inflation at its highest in decades, the central bank has already taken aggressive action to fight rising prices with more restrictive policies, including significant increases in interest rates. The risk is that the Fed cannot cause a “soft landing”, ie cooling inflation without triggering a recession.

“If the FED doesn’t try, or if the cryptocurrency narrative gets worse, Bitcoin could hit $15,000.” – wrote in the note Samir Kerbage, director of the company managing digital assets Hashdex.

While Bitcoin and its counterparts should in theory be independent of major financial markets, they have been shown to be correlated with stocks and especially tech stocks. The fall in the S&P 500 and Nasdaq indices since Friday amid signals that inflation has yet to peak has left its mark on digital assets.

However, tensions in the cryptocurrency market itself, including the suspension of withdrawals by major cryptocurrency lender Celsius, further increased the pressure on cryptocurrencies, which sold more than the shares.

Significant liquidations of leveraged positions in the cryptocurrency futures market contributed to the further decline in cryptocurrencies. Margin positions can be sold in the blink of an eye if the value of the collateral – often Bitcoin – falls below the required level. More than 100,000 traders with positions worth around $290 million were liquidated in the past 24 hours, according to data from Coinglass.

“We can aim for a quick return to $28,000-30,000 if liquidation levels ease and concerns about Celsius ease.” Kerbage wrote.

For other cryptocurrencies, including ETH, the second largest, the situation was similar. The token on which the Ethereum blockchain is based fell 14% to $1,050, while at the end of last week its value was around $2,000.

“Bitcoin at $20,000 and ETH at $1,000 are levels to watch.” Kerbage wrote. “If these psychologically significant levels are lost, we could see significant fear in the market which could put more downside pressure.”

Smaller cryptocurrencies, or altcoins, also suffered. Both Cardano and Solana lost 12%. Memecoins also failed, with Dogecoin and Shiba Inu down 11% and 8%.

Coinbase is one of the listed companies with the most exposure to the cryptocurrency markets. Stocks have fallen 80% this year, far outpacing Bitcoin’s decline. This shouldn’t come as a complete surprise to investors, as Coinbase has found that volatility in the cryptocurrency market will affect its financials, meaning it will be profitable in good times and losing in bad times. The company announced last week a workforce reduction of 18% (1,100 jobs).

Wall Street is sour on Coinbase. JP Morgan Securities analysts downgraded their stock recommendation on Tuesday and lowered the stock’s target price to $68 from $171.

Marathon Digital Holdings. The company’s fortunes are closely tied to fluctuations in cryptocurrency rates. This year, shares of the cryptocurrency mining company have fallen around 80%. 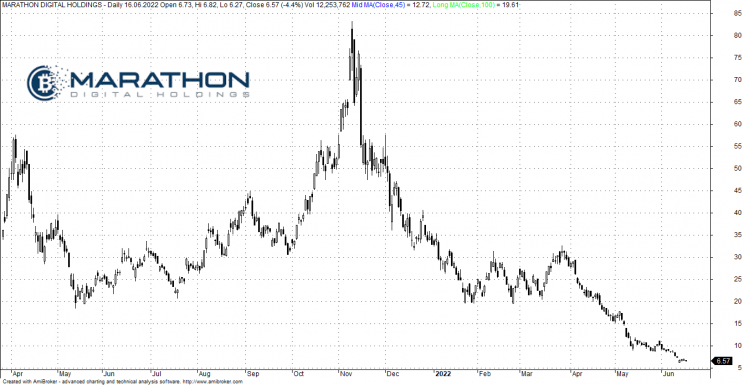 Although MicroStrategy was aggressively acquiring Bitcoin in an effort to hedge against inflation. As of March 31, the company owned 129,218 Bitcoin coins, which were then valued at $5.9 billion. In light of Bitcoin’s decline in value, stocks fell 70%. 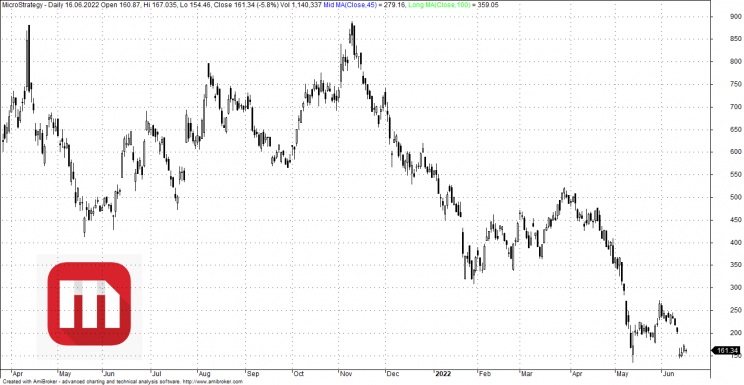 PayPal stock has also seen a 60% drop this year due to cryptocurrency concerns as well as concerns about increased competition from Apple. PayPal recently started allowing users to transfer cryptocurrencies to other digital wallets and exchanges. However, analysts are less excited about PayPal’s entry into cryptocurrencies, saying the company’s margins would improve if it scaled back operations. 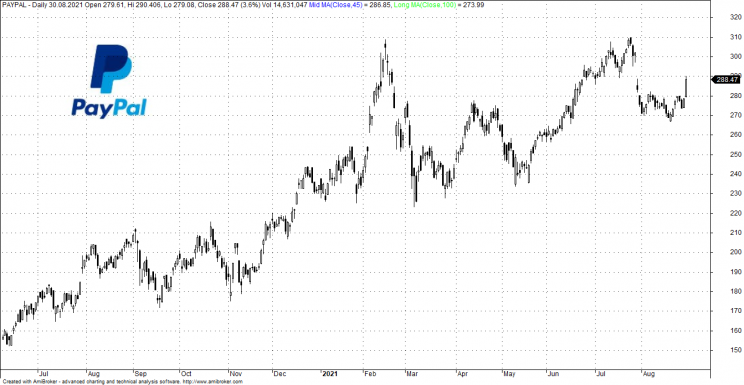 Last year, Robinhood was at its peak as retail investors wanted to trade shares of so-called meme-stocks, options and cryptocurrencies. This year, the shares have fallen 60%. This is partly because cryptocurrencies have lost some of their luster, but the decline in stocks also reflects lower retail volume.

First quarter transaction revenue for Robinhood was halved from a year ago. The company saw a 73% drop in equity earnings, while revenue from options and cryptocurrencies fell nearly 40%. Over the past year, cryptocurrencies have typically made up about a quarter of Robinhood’s revenue, but in Q2 2021, they made up 50% of revenue. 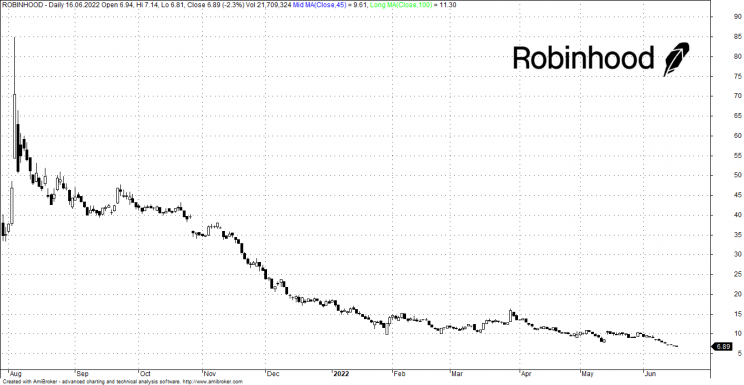